The orientation of your window defines where to put your plant so it gets medium to bright indirect sunlight. If your window faces
North, place your plant between 0 and 1 ft away from it.
East or West, put it 1 to 5 ft away.
South, place it between 1 to 10 ft away, as sunlight from the South is the strongest.

This plant cleans the air from toxins and VOCs like a pro.

NASA tested this plant in a Clean Air study in an attempt to research ways to clean the air in space stations in 1989.

This plant helps clean the air from bacteria like a pro. Russian scientists tested it in a real room environment.

In the Middle East, the figs that grow on its branches in the wild are believed to bring peace and abundance; the seeds found in the fruit represent universal understanding and knowledge. 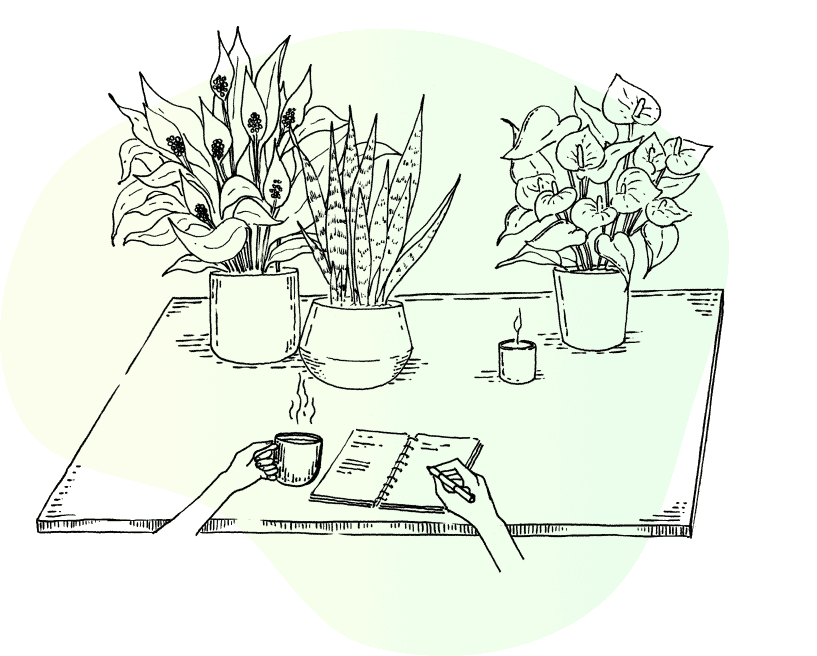 Ficus comes from Latin, fig. The Ficus genus, or fig tree family, has deep spiritual meaning in many traditions and philosophies. Its fruit is often considered sacred. For example, in Islam, there is a sutra named ‘The Fig’ in the Quran. In Jainism, a religion based on the principle of non-violence forbids eating figs because of their sacredness. Adding on, it is said that the Buddha reached bodhi (enlightenment) under a sacred fig tree. In Indonesia, the fig fruit is said to be the link between the physical and the spiritual worlds. The Fig tree also bears spiritual significance for the Kikuyu people, the largest ethnic group in Kenya, for sacrifices to Ngai (their supreme God). And finally, the fig tree is also mentioned in the Torah and the Bible, where it is written that with fig leaves, Adam and Eve covered their special bits.

‘Benjamina’ comes from the Hindi name ‘Benjan.’ It’s the official tree of Bangkok, Thailand. It is also known as the Weeping Fig or small-leaved rubber plant because its leaves look like they are made of rubber.

There are different kinds of Ficus benjamina, so each one will have a different look.

This plant comes in different varieties.

Note: the variegated ones (with light green or white foliage) need more light than their dark-leaf siblings.

Need help choosing your plants? Let us guide you.

Create your own green space in 2 minutes

Tell us about yourself and your place

Get your personalized plant collection

Check the direction of your window, then put your plant within the range suggested below.

Within any given range, aim to place the plant as close to the window as possible.

Check the moisture of the soil 1/week and water only when 2” of the topsoil is dry.

2' OF THE TOPSOIL IS DRY

Aim to provide the air conditions your plant would find in its natural habitat.

Hot and cold air drafts. Keep away from A/C vents and heaters

Use liquid fertilizer as indicated below from March to September.

Fertilizing in winter and fall months

To place your plant in the perfect spot, let’s start with understanding how much light it needs and how much light your place gets. To figure this out, you need to find the direction of your window and measure how far the plant is from it. First, using the compass or map on your phone, see what direction your window faces: North, East, West, or South. Here’s what you need to remember:

Within this range, the closer your plant is to the window, the more light photons it gets, and the better it thrives.

The Dislikes of Your Alocasia When It Comes To Light

Your
Ficus Benjamina doesn’t like direct sun rays. They are harsh and can sunburn the plant’s sensitive foliage.

Note: This is a general guideline. Each place is unique, and you know yours best. Is the window view obstructed by the trees and a highrise? Is there a sheer curtain? If so, less light is coming in. Move your plant closer!

Still not sure if your Ficus Benjamina will be thriving in the spot you picked?

Another simple way to define brightness levels is by measuring the intensity of the shadow. That’s particularly helpful if the view is somewhat obstructed and it’s hard to estimate how much light actually sneaks in. Place a sheet of paper on the spot where you’d like to grow a plant. Hold your hand about 1 foot (30cm) above the paper. Now, what do you see?

Ficus Benjamina is a MODERATE DRINKER.

Check your plant regularly, but only water it when it’s thirsty.

Every plant needs a period of drying for the oxygen to get to its roots. Overwatering damages your plant by preventing that process from happening. So how can you know how much water your
Ficus Benjamina needs? The ideal watering frequency depends on the plant’s drinking habits and how fast the soil dries out in your unique indoor space, so it would be misleading to recommend a fixed schedule. To best meet your plant’s water needs, monitor it, and watch for the signs it’s thirsty.

Here’s how the how to:

Once a week before giving your plant a drink, check the moisture level in the pot by dipping your finger a couple of inches into the soil.

Moderate Drinkers need to be watered when 2′ of the topsoil is dry.

Another sign your plant is thirsty is when its leaves start drooping. Even if this happens, don’t forget to check the topsoil first and make sure it’s dry before watering the plant.

The dislikes of Your Ficus Benjamina When It Comes To Water

What to do: Make sure you always discard the drenched water from the pot or saucer after watering.

What to do: Make sure only the topsoil gets dry in between the waterings while deeper down the pot, the soil still retains some moisture. The plant’s roots need to stay in slightly moist (not wet) soil all the time.

Ficus Benjamina comes from a Tropical climate. Aim to provide the air conditions it would find in its natural habitat. At all times, maintain a comfortable room temperature of 65-85°F,18-30°C.

Ficus Benjamina thrives in high humidity (40-50%) and it will feel best if you mist it daily or use a humidifier. However, it is adaptable and will also tolerate normal humidity(30-40%), so don’t sweat it (get it?).

The Dislikes of Your Ficus Benjamina When It Comes to Air

What to do:
Your plant will feel best if you mist it a few times a week or place it by a humidifier.

What to do: During the winter months, keep your Alocasia away from open windows and doors. Don’t put it close to a heater. In summer months make sure you don’t put it right under AC.

To provide your Ficus Benjamina with the right nutrients, fertilize it from March to September.
It’s a HEAVY eater plant. As a rule of thumb, it should be fertilized once a month.

Otherwise, you can use all-purpose indoor plant fertilizer.

Never fertilize your plant during the winter or fall months. It goes through winter dormancy and its appetite naturally slows down. 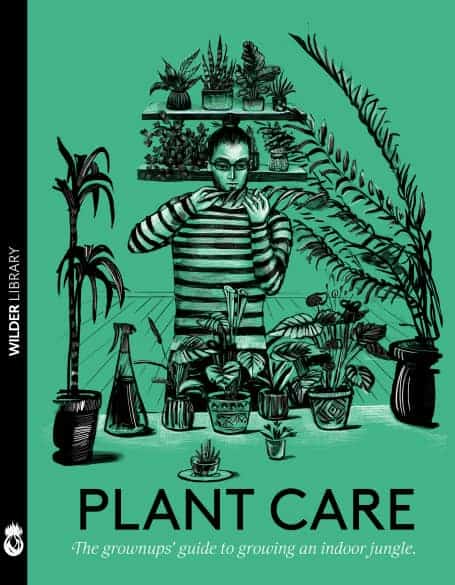 Curious to learn more?
Hop down the rabbit hole with us!

Get our grownups’ guide to growing an idoor jungle, where you’ll find everything you need to know about plants, and nothing you don’t. We’ll take you deeper into the plant care world and its 4 elements: light, water, air, and soil. Each section touches on one aspect of plant care to help you keep your plant happy and healthy.

Your plant journey is about to get as fun and simple as ever.

Plants come in nursing pots, usually plastic containers that could use a little  personalizing. They come in standard sizes: 4″, 6″, 8″, 10″, 12″ (the number refers to diameter), bare root(b/r) or preplanted in decarateive pot (pot) .

When choosing a decorative pot to slide the nursing container in, look for a size slightly larger (1-2″ larger), so it can fit comfortably. E.g. For a 4″ nursing pot, pick a decorative pot with a 6″ diameter.

What about air-purifying plants?

Wilder pro tip: Air quality in our homes is less than ideal. It gets
contaminated with toxins and other volatile compounds through the everyday things and products we consume such as cleaning, body products, even furniture. Studies have shown that having 3-5 plants in a small room can help purify the air. 80 when browsing through plants, look out for the “NASA clean air study” label or “air-purifying” plants to get these beneﬁts!

What to do if I have pets and crawling kids?

Wilder pro tip: Even if you have toxic plants at home, they are rarely deadly, and the toxicity level of a plant will usually cause physical reactions if a lot of it is consumed. To be on the safe side, keep these plants out of reach of curious nibblers, or look out for pet-friendly plants. 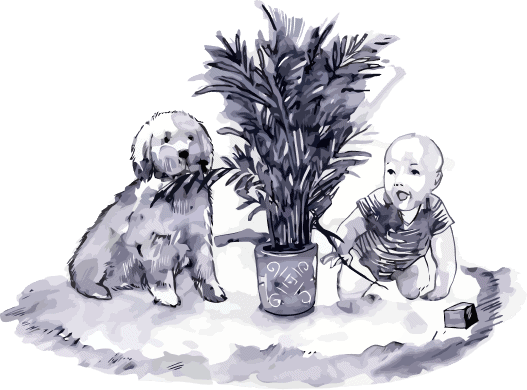 So how do I know how bright my space is?

Wilder pro tip: The amount of light your space receives depends on the direction of the window and how far from it the plant is.

Another simple way to define brightness is by observing the intensity of the shadow. Take the test yourself: place a sheet of paper on the spot where you’d like to grow a plant. Hold your hand about 1 foot (30cm) above the paper. Now, what do you see?